On sep 23 1897 Johannes Hendrikus (Jan) boarded the SS Mexican in Vlissingen to start a new life in South Africa. After a journey of three weeks, on Oct 13, the ship arrived in Cape Town. Lots of adventures were awaiting him. I’m sure he had no idea at the time that the Van Vledder family tree would be as big as it is today 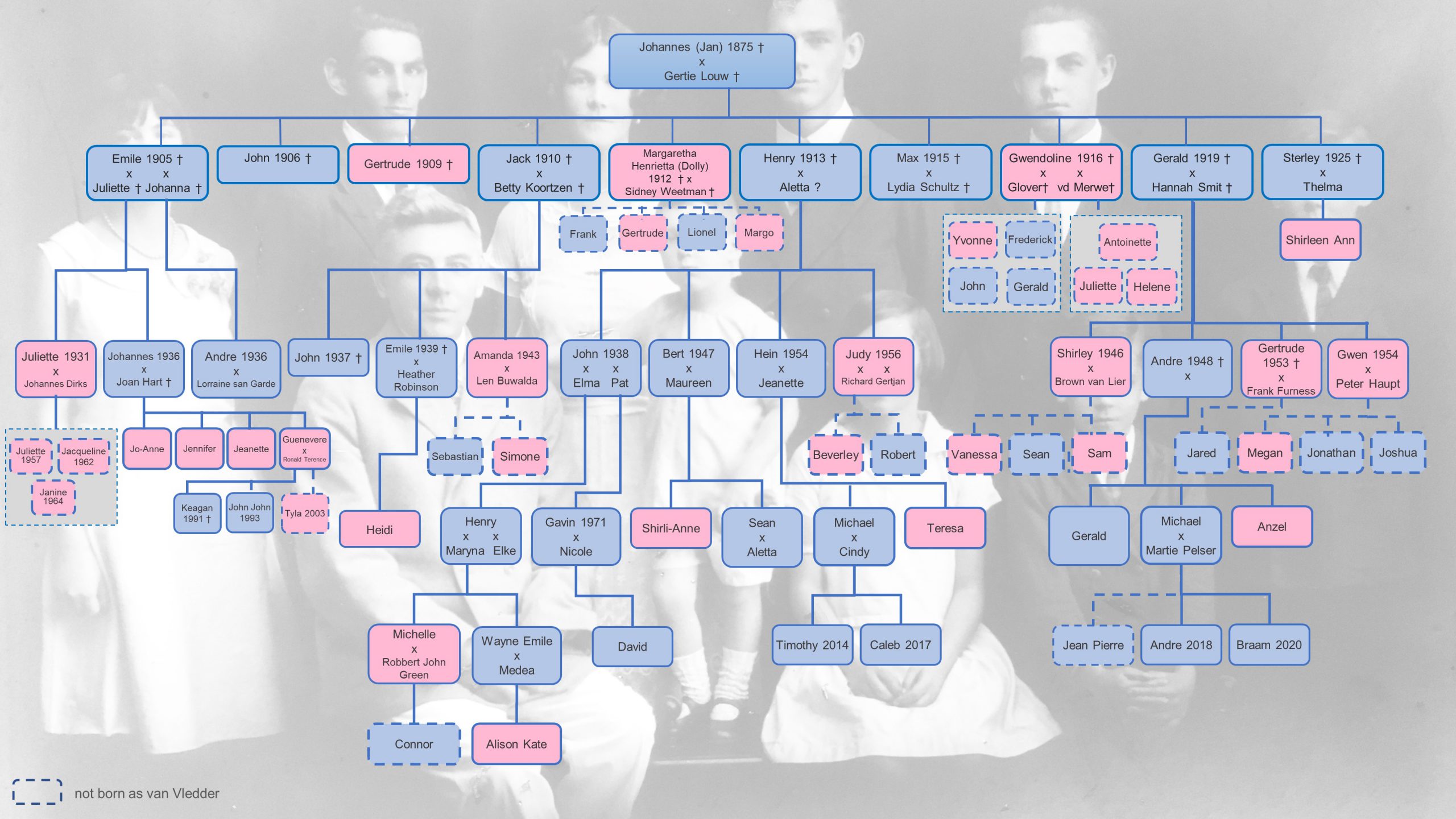 Especially the first years were not easy for Jan. He arrived in South Africa with not much more than a good spirit. He had to build a new life and had no idea that he would get involved in the second Boer war, that lasted from Oct 1899 until May 1902. After that, life got a lot better and his marriage with Gertie Louw in 1904 was the starting point of a big family. No less than 10 children were born.

In 1914, his brother Max joined him in South Africa, but so far we have no further information on Max’ life in South Africa. Also there are still some other blanks, we will add new info when it comes in. You can read what we have so far by downloading part 4 of the Van Vledder genealogy here (note: work in progress, not yet available)

It took 3 weeks before the ship arrived in Cape Town. You can read his diary of the trip  by downloading it here (written in old dutch) or  here (English)

My beloved family, friends and acquaintances, Just before leaving Dutch soil a last farewell and goodbye. From Southampton my journey will continue. I wish you all the very best.

It appears we should expect war. Already 20000 farmers are on the Natal border and I have also been summoned. Tomorrow Houwink and I will leave. Please follow the news in the newspapers, as this is the last letter that can be sent. From tomorrow onward all mail will be stopped. Yesterday Houwink and I have bought all groceries and we say goodbye today at Carel and Anna’s place in full uniform. We also will have our picture taken. I will keep Carel and Anna posted as much as possible and hope I won’t be shot. I’m not dreaded going. On the contrary, I will go in a good mood and with a light heart After all, my plans are ruined by the British, so this is a good option to get back to them. Furthermore, it’s a new adventure and hopefully I can put my military service in Holland to good use. Boy o boy, quite some excitement here. Few people are as happy as I am to have all these experiences in this country. Our will is made today (although it doesn’t entail much, and then it is “off we go”. Don’t worry, I’m very calm. Send my greetings to all my loved ones and tell them it’s not my intention to get shot. I feel I have a better chance of having a life without bullets in my body. Again, farewell my loving Mother, sisters, brothers.

The first couple of years were a real adventure for Jan. He started as a travelling salesman and settled in Johannesburg in his second year. But then the second Boer War started….He described his adventures in a letter to his brother Max that you can download  here (Dutch) or  here (English)

On October 11th 1899 the second Boer war started. It was the beginning of a war that lasted until May 31st 1902. Many prisoners were sent to British India. Jan had a diary of a prisoner but lost it and was only able to reconstruct parts of it that you can read here (in Dutch) 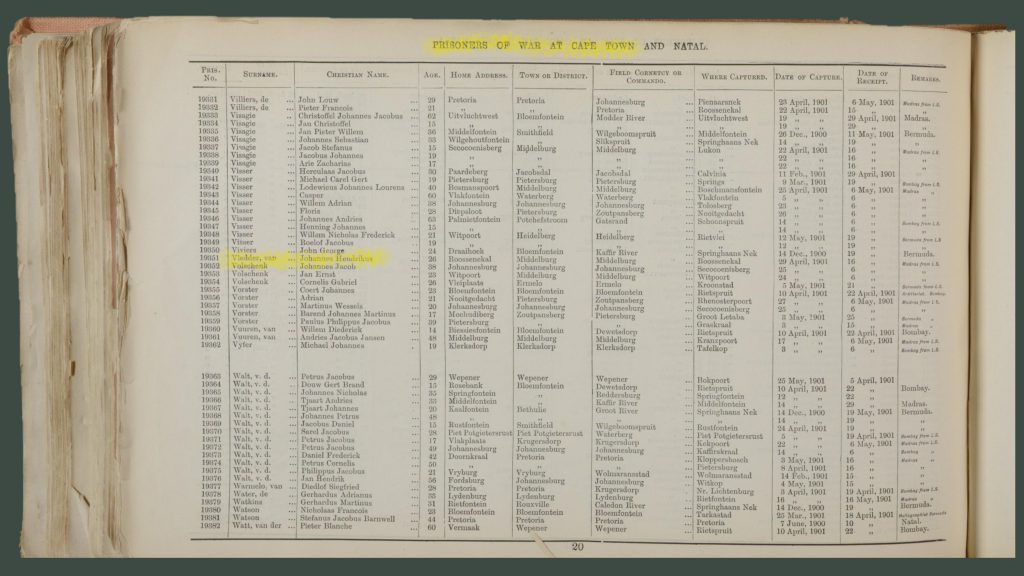 Life after the war ended

It was only after the war ended, so almost 5 years after Jan had left Holland, that he could really work on pursuing his dream of a happier life and family in South Africa. In 1904 he married Gertie Louw and in November 1905 their first kid, Emile, was born. Their second and third child, John and Gertie, died with a year however. But after that another 7, healthy children were born. With 6 boys the roots were there for a bright future for the van Vledders in South Africa.

And in 1914 brother Max, who emigrated to the United States in 1901, decided to join Jan and also moved to South Africa. It remains a mystery however what has happened to him and whether Max also left any offspring in South Africa. 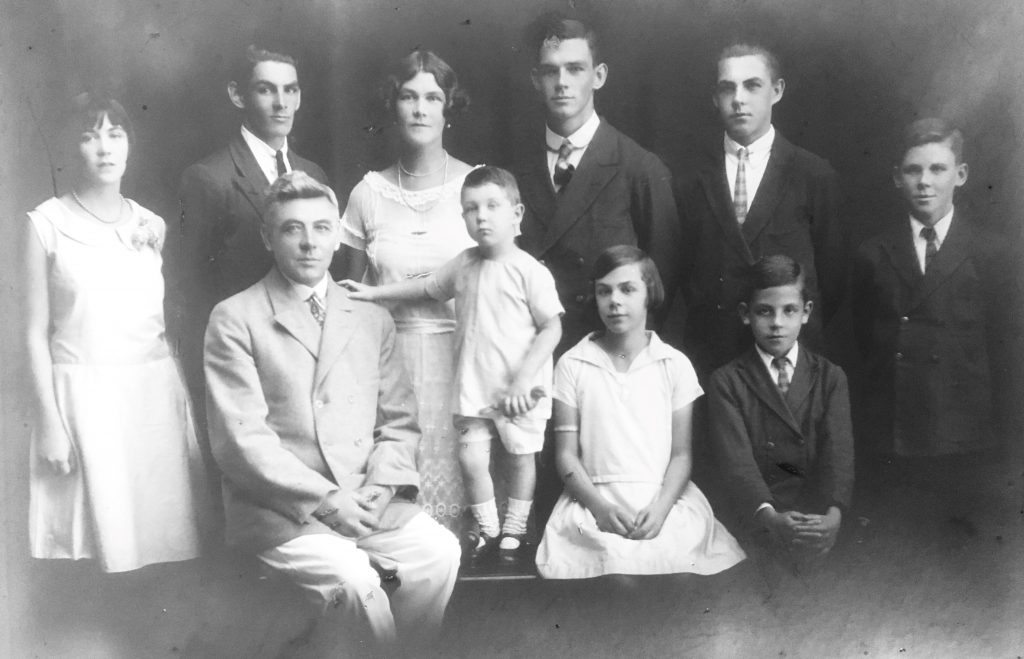 This document is in French. It is issued by the Dutch Ministry of foreign affairs and signed by the commissioner of the King. It says something like "the Ministry of foreign affairs of the Kingdom of the Netherlands, princess of Oranje Nassau (the last name of our Queen/King), prays and asks, on behalf of her majesty, admirals, generals, governors bla bla bla not only to grant passage without any trouble to Johannes van Vledder, traveling salesman, born in Nieuwendam and living in Utrecht, with his clothes and luggage and traveling to South Africa, but also to offer him any help, whether solicited or not, which he will gratefully accept" The document was issued on Aug 10 2003. It seems that this was a necessary document to return safely to South Africa after the second Boer war. Maybe Jan had lost his passport of this was taken away from him while being PoW